Condottiere
Boonton, New Jersey, United States
Wargaming enthusiast for over 30 years. I started, like so many others, collecting Airfix plastics, eventually graduating to metal figures. My gaming interests are varied, ranging from Ancients through WWII. However, my "true love" is the Renaissance, probably owing to my educational experiences (studied in Florence, Italy), and my continuing interest in Italian culture and history--gaming the Renaissance seems like a natural fit. 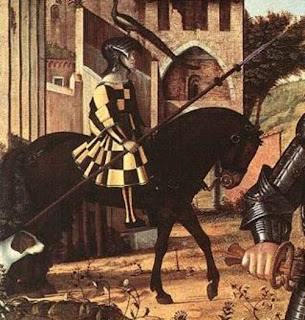 ...straight from period artwork.
Posted by Condottiere at 7:53 PM No comments:

Pictures pulled from the web... 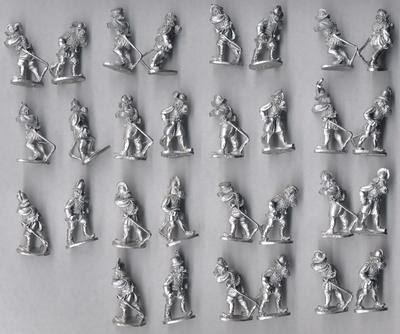 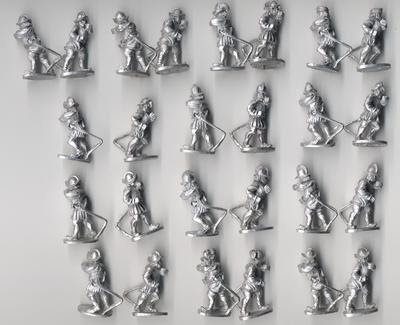 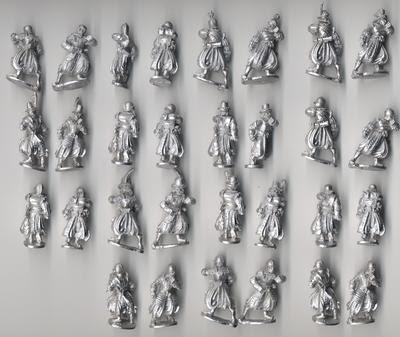 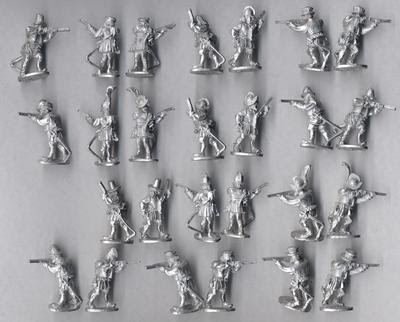 ...not my stuff. If I knew who created these photos, Igive proper credit. They are from the Old Glory 25mm Wars of Religion Range from the period of the French Wars of Religion.
Posted by Condottiere at 7:24 PM No comments: 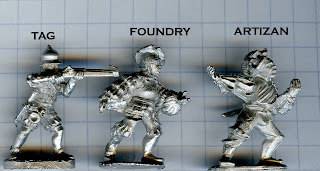 These are some comparison photos/scans I took over the past couple of years and posted on The Miniatures Page. I believe they are self-explanatory.
Posted by Condottiere at 7:10 PM No comments:

Comparisons pulled off the web ... 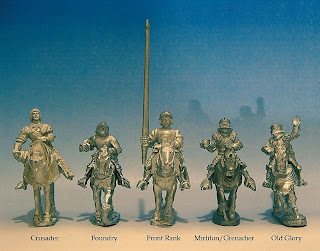 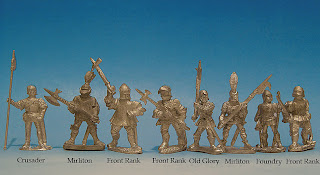 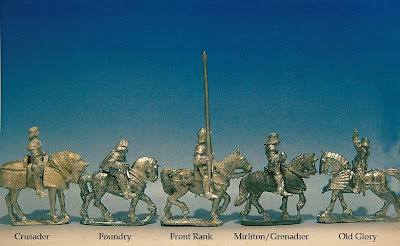 Posted by Condottiere at 4:51 PM No comments:

The Antagonists: Francis I and Charles V. 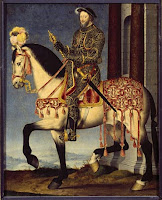 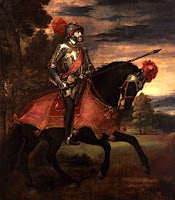 For decades, Francis I, King of France, and Charles V, The Holy Roman Emperor, competed for control and domination of Italy and various regions bordering their realms. Redoubt Enterprises produced two sets depicting these leaders as they appeared in the latter phases of these wars. Code RX25 contains Francis I and an attendant dressed in armor with tabard and holding a lance. Francis is mounted holds a mace as depicted in the painting to the right. Code RX26 is the Emperor Charles V. He, too, has an attendant that is dressed in a "Landsknecht" style dress with a large floppy hat and wearing a tabard. The Charles figure is mounted and seems to be based on the painting on the left. 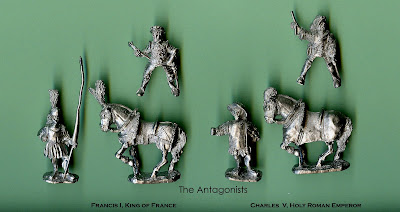 I was pleasantly surprised by the detail and quality of the sculpts. Every aspect, from the seemingly correct anatomical proportions of all the figures, to the details of the armor, horse barding and trappings, to the facial features. These figures are nothing short of marvelous.
Posted by Condottiere at 2:27 PM No comments: 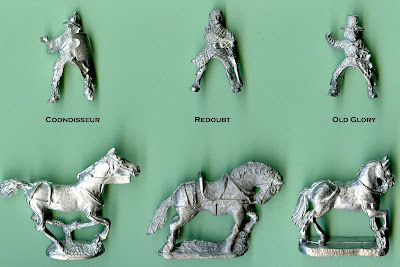 Next among the cavalry are the stradiots, introduced into Italy by the Venetians probably sometime in the 1470s probably to counter Turkish raids into the Friuli region. The French Memoirist, Philip de Commines described them:

These Estradiots are of the same nature as the Genetaires; they are attired like Turks both on horse and on foot, except they wear no turbans on their heads. They are a rugged people, couched all the year round on their horses. They were all Greeks, coming from places possessed by the Venetians, some from Napoli di Romagna [Nauplion], others from Albania at Durrazzo, and their horses are good and are all from Turkey...

The Redoubt figure comes with detached arm so that it can be posed in a variety of positions. All figures are empty-handed, so that any of the many weapons that the Stradiots carried can be used. Only the Connoisseur figure comes with shield attached. I prefer them detached, but the Connoisseur figure is rather nice. My least favorite is the Old Glory figure, mostly because of the horse.

Posted by Condottiere at 5:21 PM 2 comments:

Unfortunately, I do not have Foundry pikemen, and the Old Glory pikeman is in a lower pose than the others. These figures are fairly compatible in overall size and appearance, although the Essex landsknecht is a bit thinner than the rest, and the Mirliton seems a little taller. If used in the same units, they should mix well, especially given the greatly varied appearance of the landsknecht soldier. The only real consideration is the poses. All the Old Glory pike are in the advancing pose with pikes held at approximately a 45 degree angle, for example, whereas most of the Mirliton have their pikes at the level.

I especially like the Old Glory landsknechts. I think the poses are well suited for the tabletop (no pikes scratching paint off charging gendarmes!), and the costumes are very varied. A nice mix. The Essex figures are crisp and detailed enough, and would fit in with the Old Glory figures.
Posted by Condottiere at 1:01 PM 1 comment: